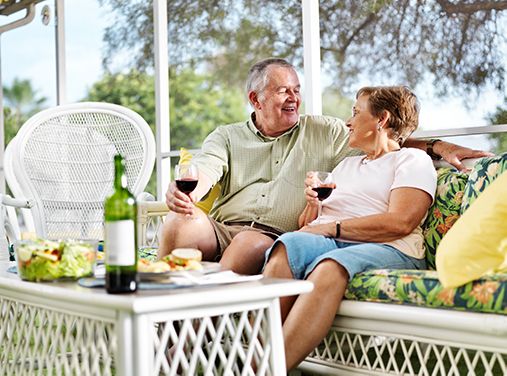 Is it us, or does Latitude Margaritaville, a new retire­ment village that’s located in Daytona Beach, Florida, sound suspiciously close to a couple of Jimmy Buffett songs? Turns out this pastel-hued development for boomers is as near as anyone can get to living inside Buffett’s brain.

You can eat a Cheeseburger in Paradise (after his 1978 tribute to a favorite food) at the Latitude Bar & Chill or exercise your pup at Barkaritaville dog park. The place’s tidy pink-and-blue clapboard homes mimic the singer-songwriter’s candy-colored album covers. When I dropped in last July, I found myself starting to act like a character in one of those songs, day drinking at a tequila-fueled cocktail party and pleasantly wasting away the next few hours in an airy beach house, which I’d rented for a couple of days to get a taste of life here.

But to attain full immersion, several residents told me, I’d have to get out in the sun and sweat a little. With Florida temperatures topping 90 degrees, I begged off pickleball, tennis or bocce, opting instead for something pool-based: a class in “aqua kickboxing.”

At the Fins Up! Fitness Center, I was confronted with an oceanic expanse of a pool surrounded by palm trees and umbrella-shaded tables. Some 20 fit-looking women in their 70s (and up) bobbed in the water while an energetic instructor in spandex cheered them on poolside.

As I lowered myself into the pool, I hoped I wouldn’t embarrass my pool mates with my vigor and prowess. Our trainer pushed the play button on a boom box and demonstrated rapid-fire moves — side lunges, front kicks, punches, jumping jacks — made maddeningly difficult due to water resistance. Five minutes in, I was gasping for air, muscles burning, my mind screaming: This cannot go on much longer!

It went on, nonstop, for another 40 minutes. Sheer ego compelled me to finish, whereupon I climbed, trembling, from the water. Only then did I notice that my pool mates were not following. They were patiently awaiting the start of the next class: “aqua Zumba.” When I expressed disbelief, they laughed. “Oh, we’ve been doing these routines for months,” one woman said. “We’re used to it.”

It was then that I understood the full scope of the Buffett Vision of Retirement Life: a vacation-style, every-day-is-Saturday vibe, mixed with some vigorous activity and community involvement to keep brain and body in working order — and hold melancholy musings at bay.

The notion of an age-restricted retirement community was born in the American Southwest. After Sun City, Arizona — developer Del Webb’s first community for people 55 and older — opened in 1960, it was such an explosive hit that it landed Webb on the cover of Time magazine. Over-55 communities have proliferated in America ever since; today there are Del Webb Active Adult Communities in 19 states, and countless competitors, including seven Leisure World locations. Recent years have seen the introduction of appealing new alternatives such as multigenerational villages and farm-to-table elder communities. Latitude Margaritaville circa 2021 has familiar echoes of Webb’s relaxation-based vision circa 1960 (if you throw in tequila, salt and medicinal weed).

Still, Buffett’s version of post-work paradise marks a departure from previous iterations of the idea, including the current big kahuna of retirement centers: The Villages, the vast central-Florida 55-plus community that boasts a mind-boggling 693 holes of golf. Started in the 1980s, The Villages has a population of more than 130,000 and is a prime stopover for political campaigns.

Latitude Margaritaville, by contrast, appears to be for boomers who share collective memories — not of Jack Nicklaus or college political clubs, but of dancing at stadium shows with a bunch of strangers-turned-comrades. Residents seem to purposefully avoid sources of interpersonal friction: During the 2020 campaign, they even voted to remove all election signs from their lawns.

Latitude Margaritaville positions itself as a younger, hipper place to retire, with marketing materials that deploy the ubiquitous slogan, “Growing older but not up.” That’s the title of a 1981 Buffett song, and it’s Buffett himself who is the development’s main selling point. As a self-described living symbol of the boomer generation, he is a perfect tout for a community tailor-made for the aging youthquake whose music and movies and books and fashions dominated the world for decades. For Buffett, it’s a savvy brand extension: His Margaritaville resorts, restaurants, casinos and merchandise have already made him a half-billionaire.

And indeed, since the first homes went on sale at Daytona Beach in November 2017, Buffett’s company has sold more than $600 million worth of units across three locations: the original one, Daytona Beach (which recently upped its capacity to 3,900 homes); Hilton Head, South Carolina; and Panama City Beach, Florida, where Margaritaville Watersound, zoned to include up to 170,000 homes, will be the largest “active living” retirement community in the United States, if fully built out. But that’s still a big if.

No one was more surprised at the notion of Buffett opening retirement communities than the singer himself. “When they approached me about the idea,” he recalls, "I said, ‘Really? They want to live in Margaritaville?’ ”

A week after my trip to Daytona Beach, I was meeting with Buffett in his light-filled, guitar-crammed home studio in Sag Harbor, Long Island. He was dressed in Hawaiian shirt and shorts, and sandals that he kicked off as we settled onto a scuffed leather couch. He’s 74 now and graying, but his committed exercise and diet regimen keeps him fit. Indeed, he seems to have blossomed with age, the bland, blond suburban dad of the 1980s and ’90s giving over to the current rascal rocker.

Buffett considers himself blessed on many counts. Married to the same woman, Jane Slagsvol, since 1977, he is close to their three grown children (two daughters and a son). Until the COVID shutdown, he was one of the most successful live acts on the planet. He has, in the last year and a half, recorded and released two albums, including Life on the Flip Side, his first LP of originals in seven years, which debuted at number 1 on Billboard’s country album chart. Still flying his four private planes, captaining his custom-built fishing boat, foil surfing, dining with friends like Paul McCartney and Warren Buffett, and bopping among homes in St. Barts, New York and Los Angeles, among other places, he has every reason to be happy.

Conspicuous in the list of Buffett’s recent achievements — which also include best-selling books and a SiriusXM radio station with 9 million weekly listeners — are major undertakings such as a $370 million resort in Times Square that opened last July and a show, Escape to Margaritaville, that played on Broadway in 2018 and recently resumed a national tour. Such projects make it clear that Buffett is nowhere close to retiring. “They’re going to have to drag me off that stage or out of the cockpit,” he says, laughing. “I want to be the poster child for the person who could retire but doesn’t.”

The utterance might seem a major PR gaffe for a newly minted retirement mogul, but Buffett knows that his fans don’t expect him to live as they do. His style is aspirational; he has been a lifestyle influencer since before the term existed. One of Buffett’s major aims in building retirement havens, he says, is so that his fans can finally experience the life he sings about. “Lot of people worked harder than they played in their real lives,” he says. “This is their time to play.”

A little history for those who might not know him: Buffett first entered the public mind as the Man on Permanent Vacation in the 1970s, after he moved from Nashville to Key West, Florida, in his mid-20s, in full flight from a broken first marriage and a debut LP that bombed. Under the influence of Key West’s white sand beaches, palm trees and ocean breezes, he stopped writing despairing folk songs and started to express his fundamentally positive worldview in a series of albums: A White Sport Coat and a Pink Crustacean (1973), Living and Dying in 3/4 Time (1974) and A1A (1974). Though none were chart-toppers, they sold well enough to keep Buffett on tour, filling midsize venues, until 1977, when he released a song about a man gently stewing in the sweet despair of a breakup. He claims it took 20 minutes to write “Margaritaville,” which his pal Tom Freston, the former CEO of MTV Networks and Viacom, says may be “the most valuable song” ever written, right up there with “White Christmas.”